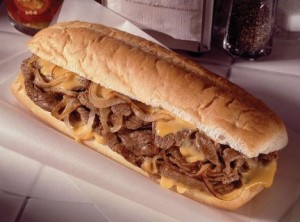 The world-renowned Philadelphia cheesesteak has long been a contentious topic for city residents. What makes up an authentic cheesesteak? And who makes the best one?

The traditional sandwich is comprised of a long roll filled with thinly sliced tender ribeye beef and cheese. Choice toppings include: fried onions, mushrooms, ketchup and peppers. In 1930 Pat Olivieri, a local hotdog vendor, created the first cheesesteak and the city of Philadelphia couldn’t get enough of it. Since that day, his restaurant, Pat’s King of Steaks, has been producing these delicious sandwiches 24/7. But just across the street, a rival restaurant, Geno’s Steaks, claims that they first added the cheese to this famous meal in 1966. The two restaurants have developed a rivalry over the past 40 years as they compete to provide the best Philly cheesesteak.

To determine for yourself who makes the best Philly cheesesteak, head down to South 9th Street and East Passyunk Avenue where both restaurants are open around the clock. Other notable cheesesteak providers are Jim’s Steaks on South Street, Abner’s Cheesesteaks on Chestnut Street, and Ishabibbles also on South Street. Spend some time enjoying this Philadelphia staple,  judge for yourself who really makes the best in Philly – and let us know what you think!

On behalf of everyone at The Residences at Dockside, our hearts go out to all those impacted by COVID-19—this includes not only those diagnosed with the virus, but also their friends and family, those whose jobs and schools have been impacted and so many more. Our focus is, as always, on the health and safety of our employees, customers and communities.

The situation is changing rapidly, and to do our part in slowing the spread of the virus, we have decided to temporarily close our sales center. The closure will go into effect on Thursday, March 19th until further notice.

There is no question this is a time of great uncertainty. While we don’t know exactly what the future may hold, we feel confident that by sticking together and supporting each other, we’ll emerge from this stronger than before.

In the meantime, please contact us online or call 215.416.2563. Our sales team is available to assist you in finding your dream home. Plus, with mortgage rates at an all-time low, it’s a great time to maximize your buying power.